Royal jelly is the food for developing brood and the queen and is a nature`s masterpiece. It can be described as a milky white cream with sourish-bitter taste and distinctive odour. If it is left in contact with the air, it thickens and eventually hardens, whereby it becomes brown. Royal jelly is the glandular secretion of young worker bees aged between 6 and 14 days. The bees produce it mainly from pollen, however honey probably also plays some part in its creation. Royal jelly contains 66% of water, 12% of proteins, 5% of fats, 12% of united reductive substances and 0.82% of minerals. It is rich in vitamin B complex and vitamins C and D, with small traces of vitamin E.

When using royal jelly, it must be stored in a refrigerator. While taking it, it is recommended to ingest up to 7 g of fresh jelly per day. Ladle the royal jelly with a plastic or wooden teaspoon and put it under the tongue.

Royal jelly regulates the functioning of bodily glands, speeds up metabolism, reduces signs of aging and has a positive effect on reduction of consequences of arteriosclerosis and high blood pressure. It also shields us in case the organism was exposed to abnormal levels of radiation.

The current discoveries regarding the role of royal jelly on development of the bee, show, that it has a highly biological role in the evolution of the colony. Among others, it lengthens the life expectancy, as the queen lives 50-times longer than a worker bee. 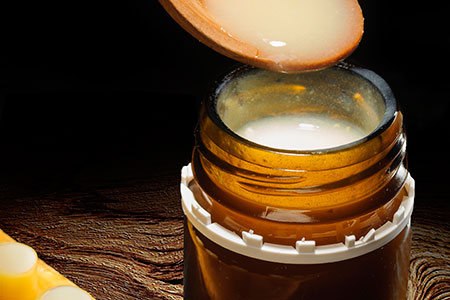